Zynq AMP: Linux on CPU0 and bare metal on CPU1

When I first started playing around with Zedboard, I set a goal to investigate ways to integrate all computing that I've ever done in an expensive (I've never worked on something that sold for less than $100K--actually more like $500K) hardware into an SoC.  Studying how to run 2 bare metal C applications on each Zynq ARM CPU (xapp 1079) was the first step, and I learned about some of the Linux kernel and device drivers after that.  When I studied xapp 1079, I had trouble thoroughly understanding its companion reference app xapp 1078, in which the app on CPU1 is kicked off from Linux running on CPU0.  But my half-year long detour through the various Linux subsystems just paid off serendipitously, because I found a Linux kernel module that may obviate the need for xapp 1078 altogether (actually will make xapp 1078 seem like a giant head-fake; maybe not as bad as the James Clark's WebTV venture during the height of the dot-com boom, but still right up there).

There are 2 reasons to keep zynq_remoteproc as a module rather than compiling into the kernel:
NOTE TO SELF: after compiling modifying the kernel module and doing a module_install, the modules still need to be copied to the NFS export!

When Xilinx made a marketing push to AMP (asymmetric multi-processing) a couple of years ago, they put out (rather quietly) an application note ug978 that launched FreeRTOS on CPU1 from Linux running on CPU0.  I will try to use zynq_remoteproc module--the specialization of the generic Linux remoteproc module--as verbatim as possible (<kernel>/drivers/remoteproc/zynq_remoteproc.c), to launch my own bare metal C++ application on CPU1.

Firstly, the module has to be built.  I added the following lines to my kernel defconfig:

Next, the kernel has to be told about my desire to use the zynq_remoteproc driver, through DTS.  I added the following entry in zynq-zed-adv7511.dts:

Here, I am telling the kernel that I want to use the last 2 MB (out of 512 MB available on Zedboard) of the RAM for the bare metal app running on CPU1.  Please recall that the memory was declared in zynq-zed.dtsi, which is included by zynq-zed-adv7511.dts:


To constrain the Linux kernel to only 510 MB without having to change the above DTS entry, I add "mem=510M" in the U-Boot kernel bootargs.  Without it, the module cannot allocate coherent DMA mapping for the last 2 MB because the following code in zynq_remoteproc probe will fail (I tried it already):

In Xilinx document ug978, the CPU1 application was placed in the boot partition, right next to BOOT.bin--which lives on my SD card.  For convenience during development, I want to put the application ELF file on the NFS export.  Many Linux distributions seem to put firmware in /lib/firmware, but according to the hard coded paths in fw_path string array (<>/drivers/base/firmware_class.c), /lib/firmware/updates/ is also a possibility, as well as a custom path specified in the "path" module parameter.  This folder is conveniently accessible on my NFS host, making development iteration easier.

I can just compile this DTS in bash and move the DTB into the TFTP download folder, because I am downloading the kernel over TFTP:

Of course, there is no cpu1app ELF file in /lib/firmware, BUT the modprobe fails for a different reason if I ipino in DTS is anything other than 0:


This code is stopping the probe():

Reading set_ipi_handler(), I realized that 0 (IPI_WAKEUP) is the only available IPI handler number, so I changed DTS.  I do NOT plan to use virtio, so I simply commented out anything related to vring in zynq_remoteproc with CONFIG_ZYNQ_IPC #ifdef.

Since bare metal AMP was demonstrated in xapp 1079, it may be easiest to pick up from there.  But briefly, building a stand-alone (no OS) for CPU1 involves the following high-level steps:

Since the CPU1 BSP will NOT be used for FSBL, there is an opportunity to reduce the code size (compared to the CPU0 BSP) by NOT selecting any libraries--such as xilffs or xilrsa, as I've done below: 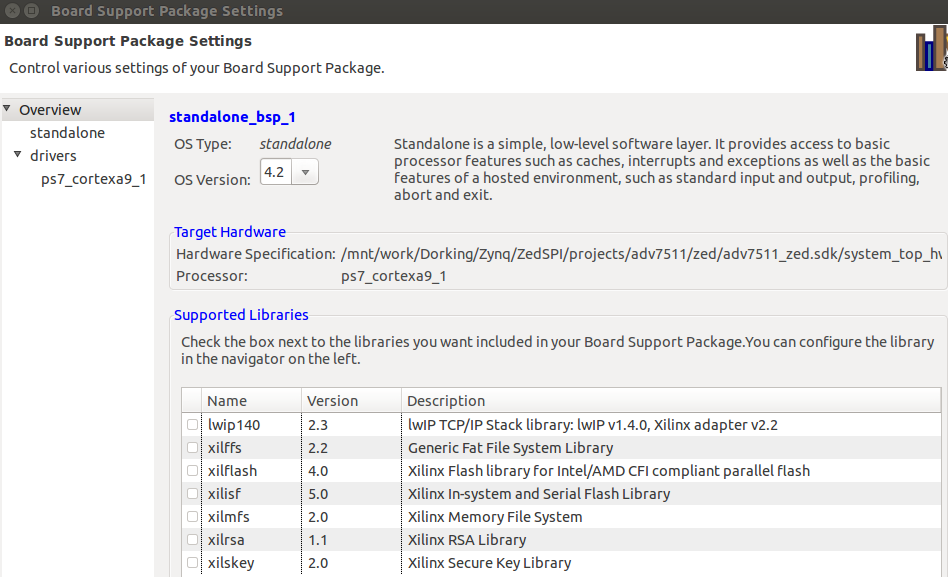 Since I am NOT interested in debugging the BSP, I have an opportunity to increase the optimization level and remove the debug (-g) flag in the BSP setting.  But this is important: USE_AMP=1 preprocessor define in the BSP setting (right click on the BSP project in Eclipse --> Board Support Package settings) changes some BSP code from the default BSP): 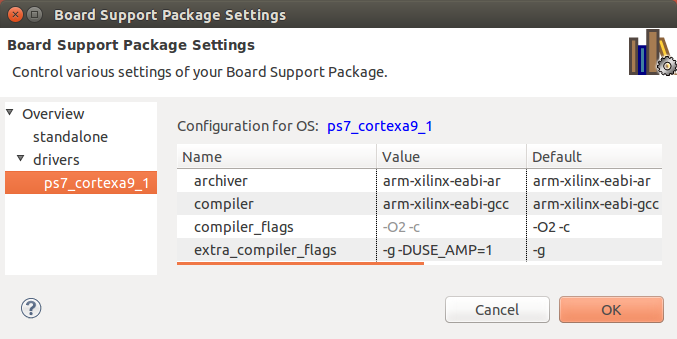 Marking certain sections of the DDR as reserved and the last part of the DDR as inner cached only is done in boot.S, when USE_AMP=1:

For the application, I copy the xapp 1079 CPU1 application as a new project "cpu1app" and start modifying.  Besides the application logic itself, the linker script (lscript.ld) specifies where the code/data sections will be placed in memory (DDR, to be specific, by CPU0--but that is not the concern of the linker script).  xapp1079 reserved 0x02000000 through 0x02ffffff (16 MB) for CPU1, but as shown in the DTS above, I want to allocate CPU1 memory at 0x1FE00000.  So I change the ps7_ddr_0_S_AXI_BASEADDR location and size to in the linker script editor, like this:

Since the linker places all sections into the DDR, there is no reason to even mention other on-chip memory (BRAM at 0x0 and OCM at 0xFFFC0000).  I don't know the correct stack and heap size yet, so I'll just leave them alone (8 KB each).

The simplest app I can think of is a blinker.  Recently, John McDougall introduced a sleep method using CPU1's private timer (which seems to be called SCU timer--I don't yet see the connection to the snoop control unit).  John McDougall's code for initializing the SCU timer and calling a sleep on it is in this download (in design/src/apps/app_cpu1/scu_sleep.[ch]).  My main() simply calls the SCU timer init and then sleep for 1 second over and over.

WITHOUT the USE_AMP=1 modifications I made to boot.S above, I can launch this program from xsdk (Xilinx SW development IDE), and I can see the blinking LED.

xsdk builds the ELF file with ease, and I moved that file into a new folder /lib/firmware within the NFS exported root for the target.  When I rebooted Zedboard, I was greeted with what seems like a minor success in dmesg output:

The debugger does NOT respond when CPU1 is halted (as in this case), so I had to rely on printk.  I came to appreciate the value of out-of-tree module compilation:

Having the target's modules folder on NFS export (/export/root/zedbr2/lib/modules/3.15/kernel/drivers/remoteproc in this case) made the otherwise printk based debugging much faster (still took a few days to navigate through all the source and try different hypothesis).  Finally, I realized that my executable does not have the .resource_table section the ELF loader is looking for.  I put an empty resource table (note that num=1 below) as its own section (which is what the remoteproc module looks for after the ELF loader parses the ELF file) in lscript.ld:

The C program can have the global data as the resource table content:

With this change, my program is copied to the correct location in the DRAM, and I can dynamically start/stop Linux on CPU1 by probing and removig the module, like this:

This driver shows up in sys/module/zynq_remoteproc/  and /sys/devices/1fe00000.remoteproc.  But  zynq_remoteproc probe does NOT call rproc; it merely loads the firmware.  Indeed, it cannot because the firmware loading completes asynchronously from module probing. Supposedly, the rpmsg module probe should call rproc_boot(), so I tried the following

But the module's probe does still NOT get called (note that I crossed CONFIG_RPMSG=y from my defconfig above)!  I could not figure out how to get the virtio device probed, and for that matter, another determined engineer could not either, so I just added in a single-threaded work queue to call rproc_boot after the firmware is loaded.

//Need my own workqueue rather than a shared work queue because I will block for completion
struct workqueue_struct* wq;
struct work_struct boot_work;
};

With this change, the my cpu1app runs on boot:

I can also debug my app in xsdk JTAG debugger.  This debugger stack trace is a proof that I can running Linux on CPU0 and my bare metal application on CPU1:

rmmod zynq_remoteproc does not work; remove() method is not even getting called.  As a result, I cannot stop cpu1app; it just starts at the system bootup, and keeps running--which is OK for an embedded application.  Another approach would be to create another module that boots and stops zynq_remoteproc, but I don't know how to get a handle to the existing zynq_remoteproc instance...

If I provide a sysfs file for the userspace to write to, the firmware will probably have been loaded already by the time the user writes '1' to the attribute file.  So I created the store/show methods of "up" attribute as shown here:

And in probe, I can register this file:

When I probe this module, I can read the "up" file

I then start the cpu1app by writing 1 to the file:

And the up file now reads 0, which means RPROC_RUNNING (and the LED is bliking!).

To stop CPU1, I have to do 2 things in succession: write 0 to the "up" file, and then remove the module:

At this point, Linux has been restarted on the 2nd processor; if I do things in this way, I can restart the app again by modprobing and then writing 1 to the "up" file again.
Posted by Henry Choi at 9:04 PM